Welcome to our Chaplaincy!

All students (past and present!), families and staff are welcome to pop in for a cup of tea and a chat at any time. Our integrated ethos based on Christian values, is expressed in the commitment to be one community who learns and worships together based on the principles of equality, respect, reconciliation and service to others. We are situated in the heart of the school and here to support every student and staff member with their spiritual, physical and wellbeing needs. In recent months, we have been working on extending our service to include greater wellbeing and mental health support. We look forward to the opening of our new extension in January 2023.

I am from North Belfast, a place where I grew up and where I still live today with my wife and three children. My memories of being a child through the 1990s in that part of the city are of a place where conflict was never too far away: despite the best efforts of my parents to keep me sheltered from talk of ‘The Troubles’.

I also remember that period as a time of great hope: alongside the conflict there was plenty of talk of ceasefires and agreements and a sense of optimism for the future. As I got older I had a growing desire to step outside of the ‘comfort zone’ of my Catholic background and find ways to be part of that movement for peace. So, inspired by a family connection with the Columbanus Community of Reconciliation, I decided to study Theology at Union Theological College, a Presbyterian College on the Queen’s University Campus.

I spent some time as a Community Relations Worker for Youth Link NI, delivering training to young people and youth leaders. I also worked for a few Catholic parishes as a Faith Development Worker. In 2011 I completed a Masters in “Pastoral and Educational Studies” with Maryvale Institute, Birmingham.

After qualifying as a teacher in 2012, I joined Lagan College as Catholic Chaplain in January 2013. I love working in the chaplaincy and feel very privileged to be alongside young people in the ups and downs of their daily lives. I feel very lucky to be part of an institution that shares my values, and to have the opportunity to be part of the legacy of this very special school.

I grew up in Scotland, in a village in the Carse of Gowrie, near Dundee, and studied at Aberdeen University where I graduated with an M.A. Honours (Music).

For a number of years I was involved with the Iona Community, an ecumenical community based on the island of Iona, and eventually became resident musician in Iona Abbey. The Iona Community, a sister community of Corrymeela, works for peace and social justice, the rebuilding of community and the renewal of worship.

I came from Iona to Bangor in 1987, where I worked for 5 years in a Presbyterian Church as a musician. Then in 1992, after teacher training, I was appointed as the Protestant Chaplain in Lagan College. It was the first year of the full-time joint Chaplaincy, an exciting time to join the college community and develop the role of the Chaplains with the support of people in many parts of the world.

Over the years, the little Chaplaincy hut has been filled with stories! It really has been a privilege to share both happy and sad times with students and staff.

Now nearly twenty years later the role of Chaplain is still as interesting, unpredictable and fulfilling as it was in the early years, as we share community life together and prepare for a new chapter in our story in the new school buildings.

The Chaplaincy is a unique feature of Lagan College, representing our strong integrated, inclusive and welcoming ethos. Situated at the heart of the school we are delighted to report that we are currently planning to extend and develop this area to encompass a Wellbeing Centre.

The Chaplains plan and co-ordinate school assemblies, which provide opportunities to explore our differences and discover all that we share in common.

Primarily, assembly themes follow the Christian year, whilst referring to festivals of other faith traditions and making connections with events and situations in Northern Ireland and the wider world. Special, longer assemblies are held to celebrate Harvest, Remembrance, Christmas, Ash Wednesday and Holy Week.

The Chaplains care for the needs of all students of Lagan College, of all denominations and faiths and of none. This includes supporting students and their families when specific denominational needs arise. For example, preparation for the Sacrament of Confirmation is organised each year by the Catholic Chaplain.

The Chaplains coordinate their efforts with the pastoral teams in the school. They provide a ‘drop in’ facility for all students each day, during break and lunchtimes. Students can also make appointments with the Chaplains at other times when they need to talk issues through in a confidential, caring environment, especially at times of bereavement or family crisis.

The Chaplaincy also works in partnership with the Religious Education Department, organising events and activities to support the curriculum. For example, the Chaplains organise visits to local churches of different denominations for Year 8 and an annual Year 11 Conference.

The Chaplains work with students and staff for peace and justice in a variety of ways throughout the school community. They lead justice groups in the junior and senior school, which focus on learning, campaigning and fundraising together. They also coordinate the Community Service Programme in Sixth Form. In addition, the Chaplains organise and facilitate a range of events throughout the year that aim to provide space for dialogue, for learning about the experience of others, and for reflecting on our shared challenge of peace building.

The Chaplaincy is a practical example of the integrated ethos at the heart of the daily life of Lagan College. The Chaplaincy is a safe place for anyone to drop in during break times and lunchtimes. Students and staff can call in at other times when they need to talk through some issues in a confidential, caring environment, especially at times of bereavement or family crisis.

As a community, the College meets to worship together. Students and staff have the opportunity to take part in appropriate acts of worship at assemblies and to express their sense of belonging. Worship includes whole-school and year assemblies and also special assemblies which celebrate the main festivals and seasons of the Christian calendar. Other assemblies explore themes important to the nature of the College, such as peace, reconciliation and justice, concern for others, responsibility for the developing world and Christian unity.

We work with students and staff for peace and justice in a variety of ways throughout the school community. Our justice groups in the junior and senior school focus on learning, campaigning and fundraising together. In addition, we organise and facilitate a range of events and residentials throughout the year that provide space for dialogue, for learning about of the experience of others, and for reflecting on our shared challenge of peace-building.

We also help to co-ordinate the Community Service Programme in Sixth Form. Students volunteer in a range of contexts, for example, in local nursing homes, primary schools or with our Learning Support Department.

Important work is also in helping our local community and others across the world. Annually we create hampers for storehouse, raise funds for a variety of charities and do all that we can to raise awareness and funds for those less fortunate than ourselves. 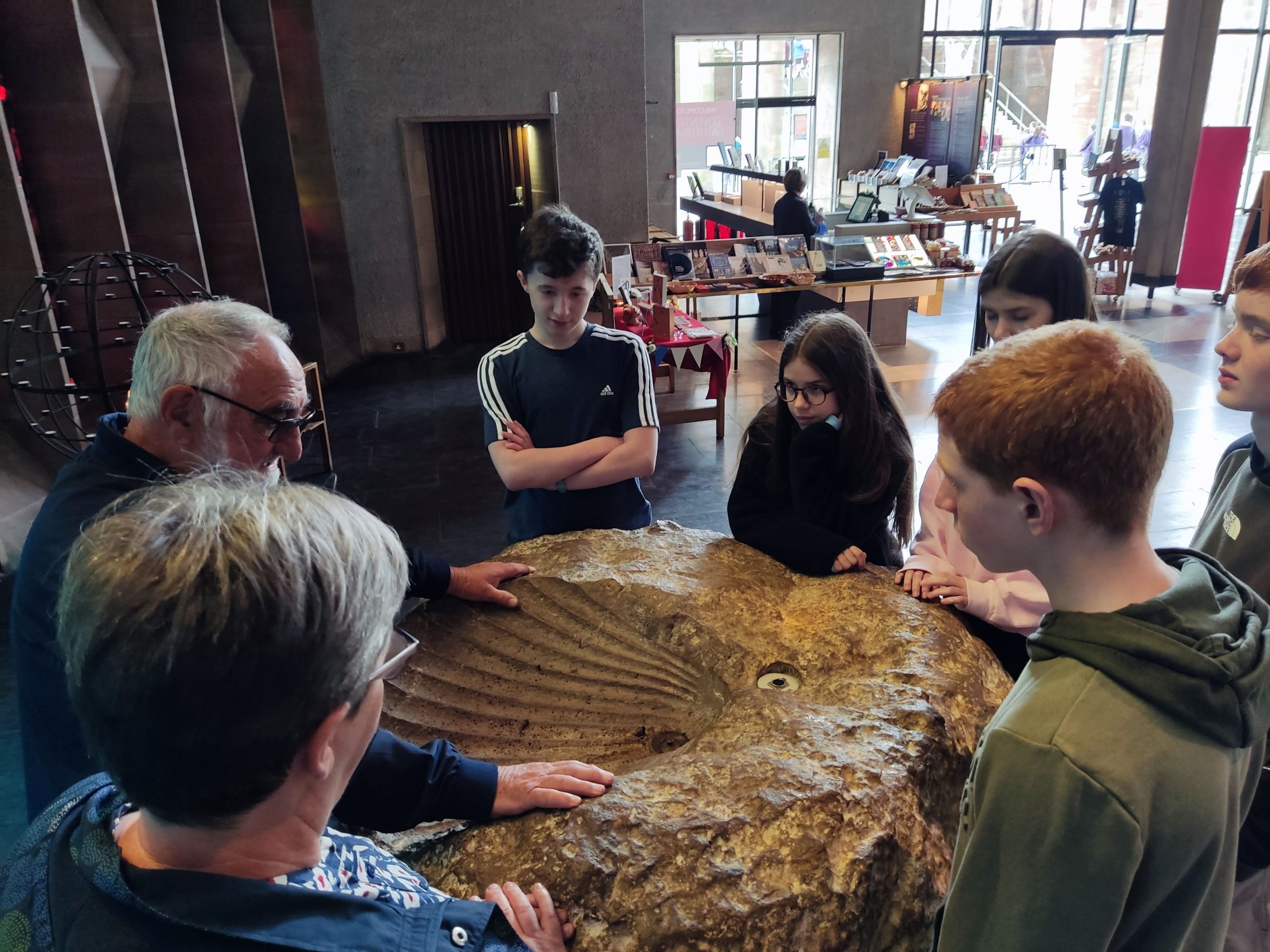 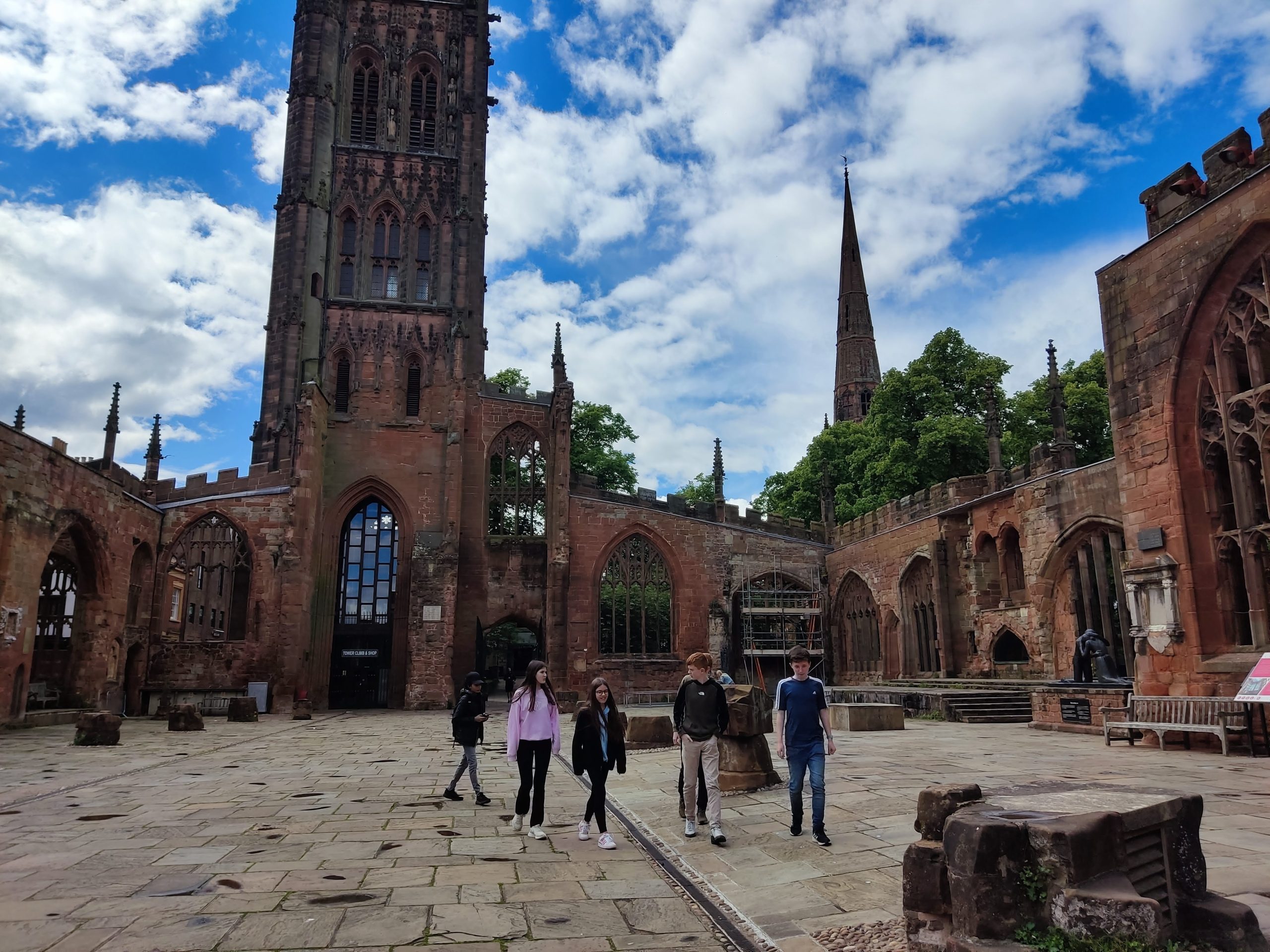 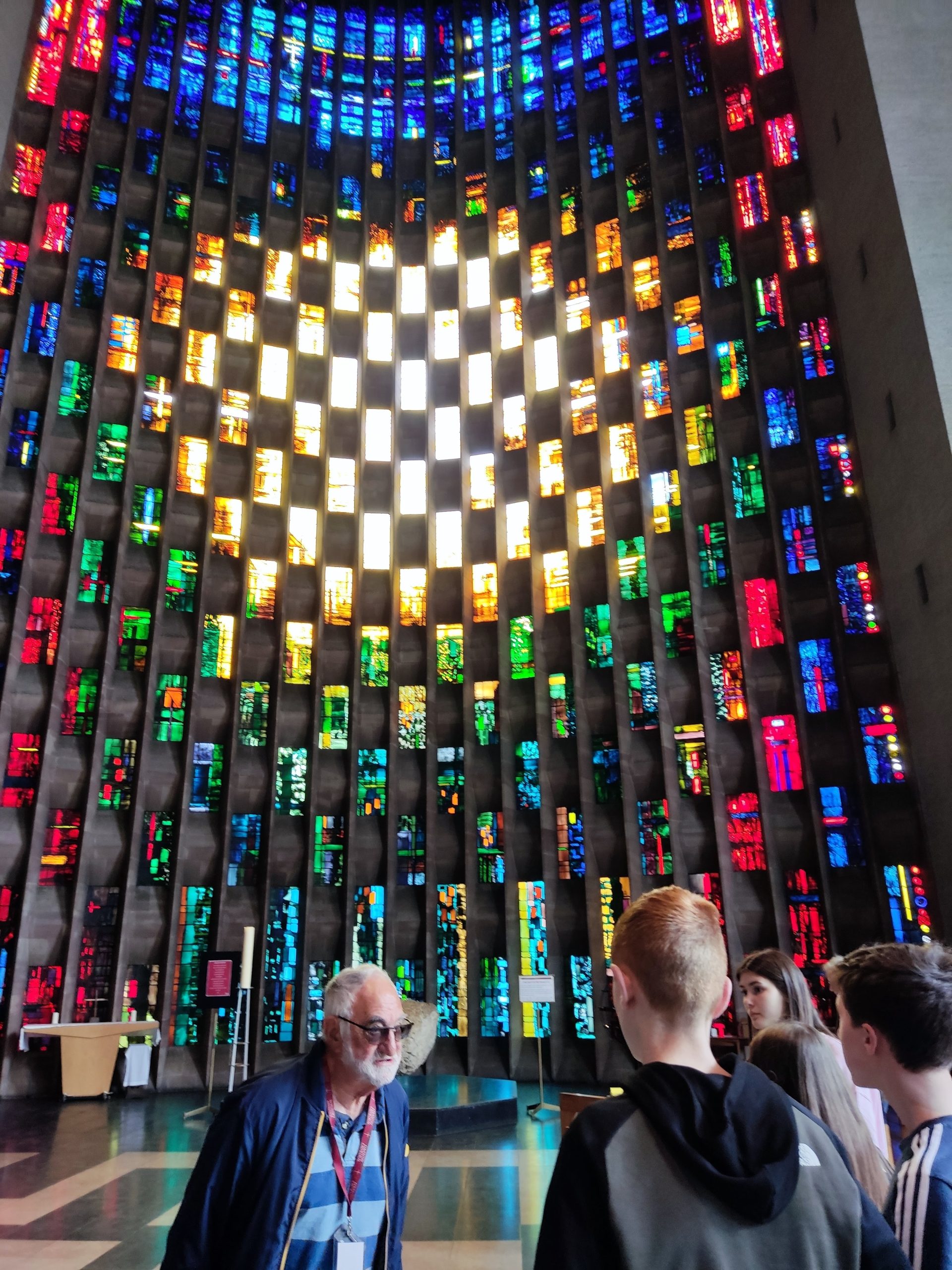 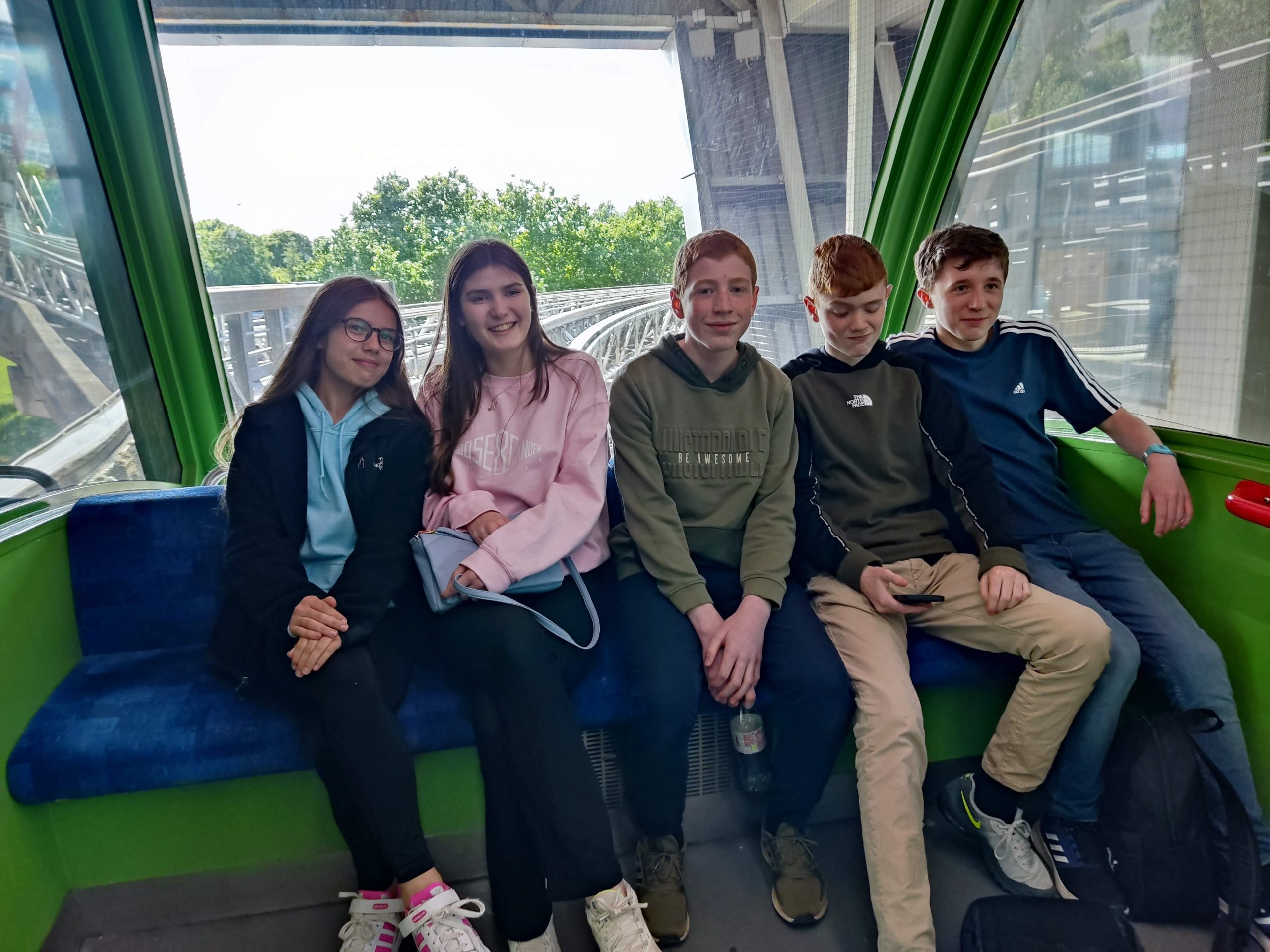 International Community of the Cross of Nails

One other thing that makes our school different and unique is our membership of the Community of the Cross of Nails. On the 14th November 1940, much of the City of Coventry was reduced to rubble by German bombs. The Cathedral, at the heart of the city, burned with it. In the terrible aftermath that followed, a priest wrote the words ‘Father Forgive’ on the smoke-blackened wall of the sanctuary.

The Cross of Nails is a very powerful and inspirational Symbol worldwide of reconciliation and peace. After the Second World War, Crosses of Nails were presented to Kiel, Dresden and Berlin, cities shattered by Allied bombing: Out of the ashes grew a trust and partnership between Coventry and the German cities.

There are now 160 of Cross of Nails Centres around the world, all working for peace and reconciliation within their own communities and countries. Lagan College is one of only four such centres in Northern Ireland and the only school. We take great pride in our membership of this organization. As a pupil at the school you are a member too. The words ‘Father Forgive’ have been made into a prayer that every member of the Community of the Cross of Nails has on display. Beside the Chaplaincy you will see our own Cross of Nails and the words of the prayer.

Based at the heart of our Integrated school

Our Chaplaincy is based at the heart of our integrated school campus which symbolises its importance. We are fortunate to be able to offer a number of spaces to gather including a group room, small meeting rooms and a beautiful quiet,  prayer and reflection space that we call the Croi.

We commend the craftsmanship of Mr George Walsh and the design vision of Mrs Gillian Cooke, who made the stained glass windows a reality, alongside our own Year 8 students.

Our Chaplaincy is a very special place with a window looking out to the beautiful Castlereagh Hills. We are developing our space into a wellbeing centre which will include an outdoor terrace and further spaces to support spiritual and mental wellbeing.

This website uses cookies to improve your experience while you navigate through the website. Out of these cookies, the cookies that are categorized as necessary are stored on your browser as they are essential for the working of basic functionalities of the website. We also use third-party cookies that help us analyze and understand how you use this website. These cookies will be stored in your browser only with your consent. You also have the option to opt-out of these cookies. But opting out of some of these cookies may have an effect on your browsing experience.
Necessary Always Enabled
Necessary cookies are absolutely essential for the website to function properly. These cookies ensure basic functionalities and security features of the website, anonymously.
Analytics
Analytical cookies are used to understand how visitors interact with the website. These cookies help provide information on metrics the number of visitors, bounce rate, traffic source, etc.
Advertising
Advertising cookies are used to provide visitors with relevant ads and marketing campaigns. These cookies track visitors across websites and collect information to provide customized ads.
Save & Accept